I had an op-ed in the International Herald Tribune this weekend arguing that peacebuilding initiatives in the Central African Republic, and specifically disarmament, demobilization, and reintegration (DDR) programs, have contributed to fanned the country's conflicts, rather than diminishing them.

The piece focuses on the most recent attempt at DDR in CAR, which never even got off the ground. But the argument becomes even stronger if one looks at preceding DDR efforts. Consider the PRAC, which ran from 2004 -- 2007. Seven thousand people who had allegedly fought during the conflicts that crescendoed with Bozize's successful coup in 2003 participated in the PRAC. Even if one accepted that they were indeed ex-combatants (and many were not -- the lists of DDR beneficiaries are notoriously difficult to police given the markets that inevitably spring up around them), these were entirely inactive armed groups. I met DDR participants in 2004 who had not held a gun since 1997. And despite having "disarmed" all these 7,000 people, the program collected only a few hundred guns, only a fraction of which were in working condition.

Failures like the PRAC have effects. When UN officials and others eager to fund the next round of DDR and peacebuilding drum up support, they can seem to be talking as if the new efforts will be carried out on a proverbial clean slate. But what the PRAC's non-disarming disarmament shows is that on the ground programs like it give rise to new definitions, new understandings of what DDR means and entails. I wrote the op-ed in part in hopes of injecting that historical memory into the discussions as to the character of the peacebuilding efforts that will soon be carried out.

I could go on -- the ways in which DDR in theory is mismatched with DDR in practice are copious -- but I'll leave that for another post, and another article.
Posted by Louisa at 1:32 PM 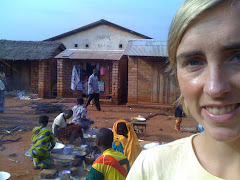